Sometimes, just because you live in a major metropolitan city your whole life doesn’t mean that you have visited every attraction or museum there is.  That is the case with Charlie.  He is a native Texan and spent the majority of his life in Houston but had never been to Space Center Houston, not even on a school field trip.   Isn’t it some sort of Houston right of passage that if you live within driving distance you must visit?

We were hosted by Space Center Houston for a day of history, education, and fun.  While we received complimentary admission, the opinions expressed are our own.

Opened in 1992, Space Center Houston is the cornerstone of the Manned Space Flight Education Foundation which is a non-profit group whose mission is to inspire generations of all ages through the wonders of space exploration.   The center is the leading science and space exploration learning center as well as the Official Visitor Center of NASA Johnson Space Center, a Smithsonian Affiliate, and a Certified Autism Center. 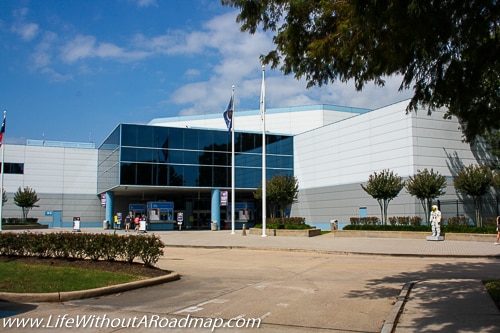 While some may think that the Space Center Houston is part of NASA, you may be surprised to learn that it isn’t.  The Center shares some 1,600 acres of land with NASA but they are two separate entities. 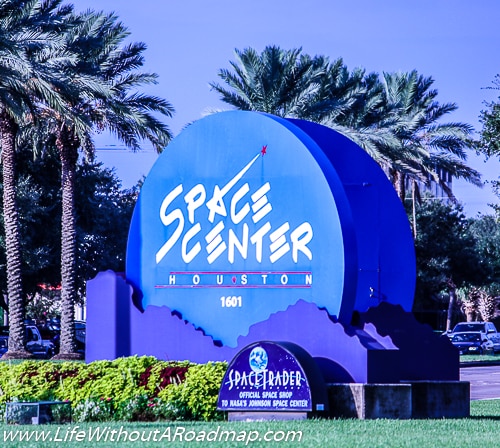 Of the land that the Space Center Houston and the Johnson Space Center currently sit on, 1,000 acres of it was once owned by the Humble Oil Company (you now know it as Exxon) and had been donated to Rice University who then deeded it to NASA.  The U.S. Government then purchased another 600 acres to ensure that once completed, the facility would face a hiway, that hiway is now NASA 1.  Once used for longhorn cattle grazing, there is still a herd that calls the area home. 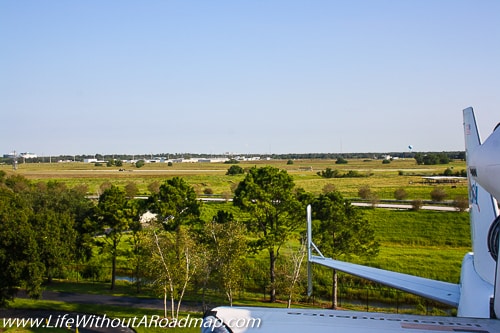 The Space Center is one of the Houston area’s top attractions, opening its doors to nearly 1.1 million visitors annually.  Approximately 1,500-2000 visitors pass through the center each day during a “normal” week when schools are in session and, of course, more on the weekends.  The Center experienced record-breaking crowds every day during the celebration of the first moon landing with over 10,000 visitors per day.

The Center is home to 3 theaters, live shows, and more than 400 space artifacts, all housed in it’s 250,000 square foot building.  There are also several permanent and some traveling exhibits that tell the story of America’s remarkable past in the human spaceflight program as well as it’s exciting future.

While the Space Center may seem like a museum with all the items from different periods in manned space travel and exploration, it is also a wonderful educational experience for all ages. 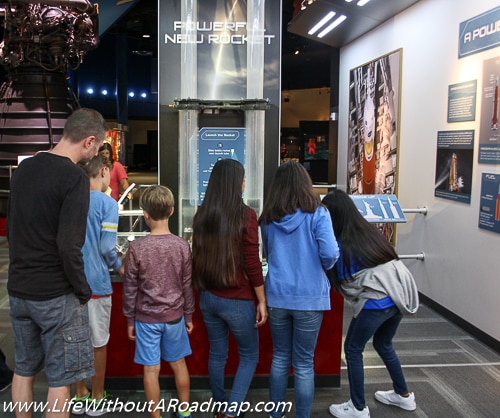 With an emphasis on STEM education (science, technology, engineering, and mathematics), visitors can see, touch, and interact with various displays throughout the center.  I have never been much into the sciences but I really enjoyed walking from one exhibit to the next, learning about the different missions, what they intended on accomplishing and how the spacecraft got to their destinations.

Space Center Houston hosts a variety of educational programs for teachers, individuals, families, or groups.  From Space Center U which teaches those who may dream of being an astronaut or engineer, to family overnight experiences where you can pitch your tent under the wing of NASA 905 and spend the night under the stars.  The Center’s focus on STEM and fostering the interest in our future engineers, scientists, or astronauts is front and center in everything they do.

Many of the artifacts displayed at the Space Center are THE REAL DEAL!  You will see actual spacecraft that flew to space and back, the suits astronauts wore on iconic missions, even the control room for the Apollo missions.

All of the artifacts at the Center are displayed in a way that provokes not only memories in some cases but also curiosity.  While we certainly did not get to every exhibit, we did get to several that were quite impressive and took us back in time.

As we walked through each exhibit, there were so many opportunities to learn whether it was through video presentations or hands-on interactions.    We even got to touch a moon rock and piece of a meteor from Mars and we didn’t have to leave Earth, how cool is that? 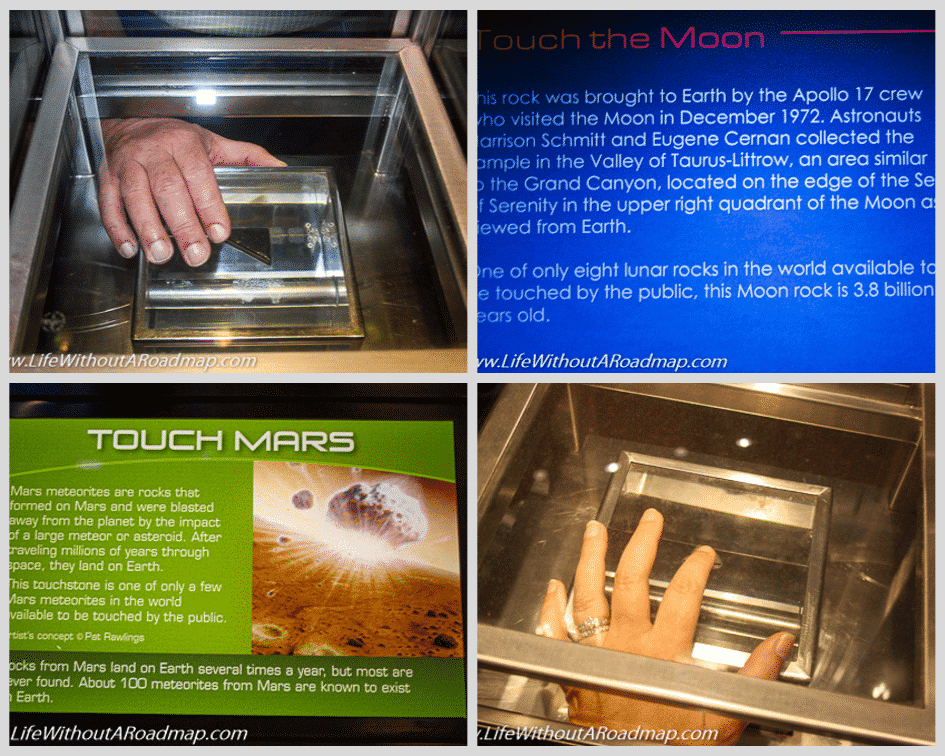 Starship Gallery is home to exhibits from the Mercury, Gemini, and Apollo eras.  Home to the Apollo 17 command module, Mercury 7, even the actual Skylab trainer used by astronauts, this gallery is the perfect place to start your journey through space exploration history. 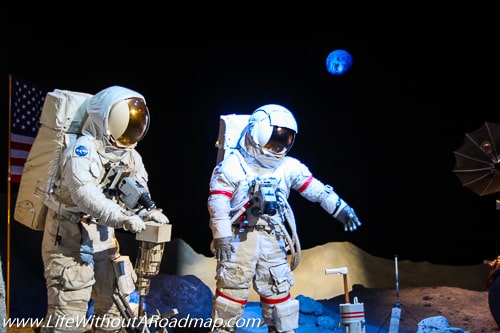 You can even see the actual podium that President Kennedy stood at when he delivered his speech at Rice University in 1962 and the vest worn by Gene Kranze for the Apollo 17 mission. 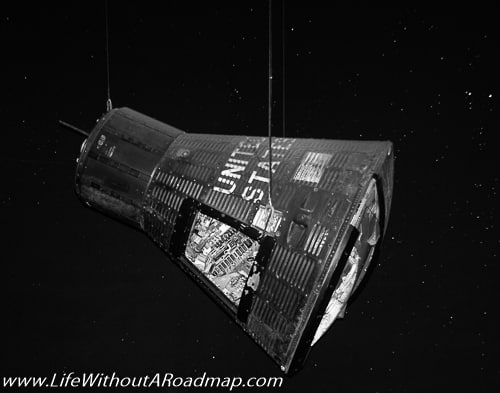 While we were both very young during the beginning of the manned space program, it is still quite interesting to see how the program began and the course it took in the early years.  Having the opportunity to see pieces of history that we could only compare to movies or history books was a special moment.

If you grew up in the ’80s or ’90s, then Independence Plaza would resonate greatly with you.  Home to the world’s only shuttle mounted on a transport jet with public access to both, it is quite an impressive exhibit that fosters memories of both great accomplishments and great sorrow. 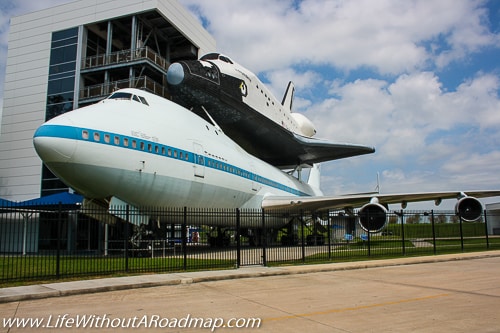 The orbiter is a replica of the shuttle Independence but nonetheless impressive.  Once inside the shuttle, you will be able to see what a shuttle cockpit looked like, a satellite cradle used to transport satellites to space, even a space toilet the astronauts would have used (if you’re a fan of Big Bang Theory, you’ll appreciate this). 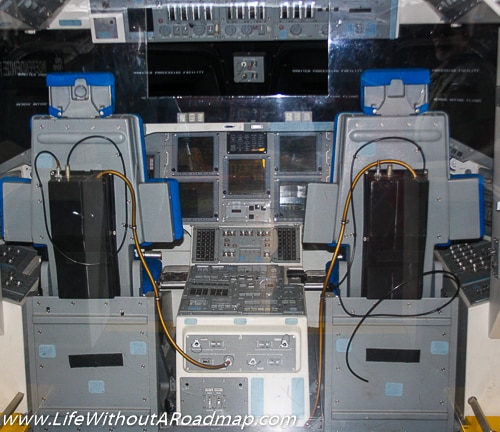 After you’ve learned what it was like to be in a shuttle, you can go down a flight of stairs and enter the jetliner that was used to transport shuttles.

Once a 747, this converted passenger jet is now known as NASA 905.  The jet is one of 2 actual jets that transported shuttles from their landing sites back to their homes.  The jet on display at Space Center carried shuttles 223 times for over 11,000 miles in its 42-year history.

Inside, you will find exhibits designed to foster interest in STEM, encourage you to explore problem-solving concepts, even see what first-class looked like back in the ’60s.  Remember first class?  It’s now business class and doesn’t even have tables.

Of all the exhibits at Space Center Houston, I think the Astronaut Gallery is the one that shows the magnitude of what the space program has accomplished over the years.

Displaying astronaut suits from several Apollo missions, including the actual suit worn by Wally Shirra on Apollo 7, seeing the suits is like seeing the past come alive in front of you.  Don’t forget to look up while you’re walking around, you never know what’s hanging over your head like Ed White’s Gemini Extravehicular Activity Suit. 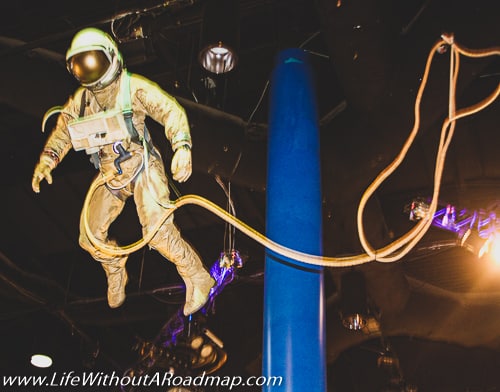 Placed proudly along a curved wall are the portraits and crew photos of every man and woman who have ever ventured into space.  From Alan Shepherd to the present day, it is a fitting tribute to those who dare to explore the stars and beyond. 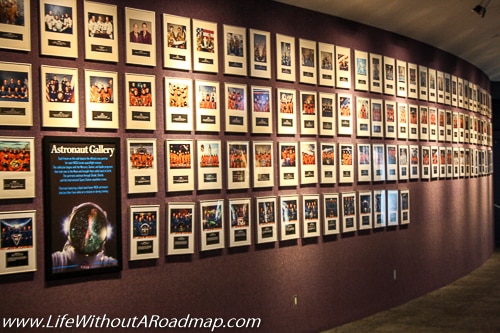 There are so many amazing exhibits and artifacts everywhere you look at Space Center Houston including the International Space Station, Mission Mars where you can see what it will take to get us to the red planet as well as how we may live there.

Whether you were around for the first man on the moon, the first shuttle into space, or are a future astronaut, each exhibit will surely stir thought and curiosity.  Don’t forget to look up as you make your way through each exhibit, there’s a lot to see both on the ground and in the air, it is about space after all.

In addition to the exhibits at the main Space Center building, they also offer tram tours to locations within Johnson Space Center that are sure to spark even more curiosity and pride.

On the Astronaut Training Facility tour, you can walk on an elevated walkway above the Space Vehicle Mockup Facility.  This is the same facility where astronauts train for current missions and engineers and scientists are developing the next generation of space vehicles.

We decided to take a tour to the Mission Control room for the Apollo, Gemini, and early shuttle missions.  If you’re fascinated with the Apollo missions or watched the movie Apollo 11 and wondered what it was really like in the control room, this is the perfect tour for you.

It’s is a bit surreal to sit in the original gallery, listen to the actual communications as Apollo 11 landed on the moon, and see the boards lite up with the exact information they saw that faithful day. 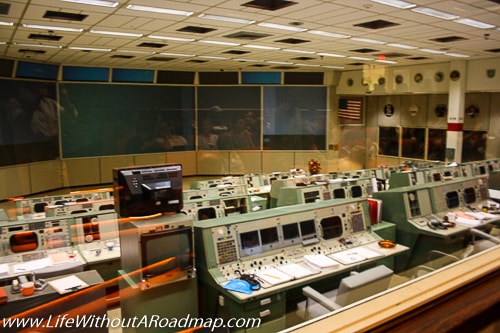 While the tram tours are included in the ticket price, tickets for the Mission Control tour are required and you can get them inside the main building.  They are timed tours with limited space so ensuring you get to the trams on time is essential to you making the tour. 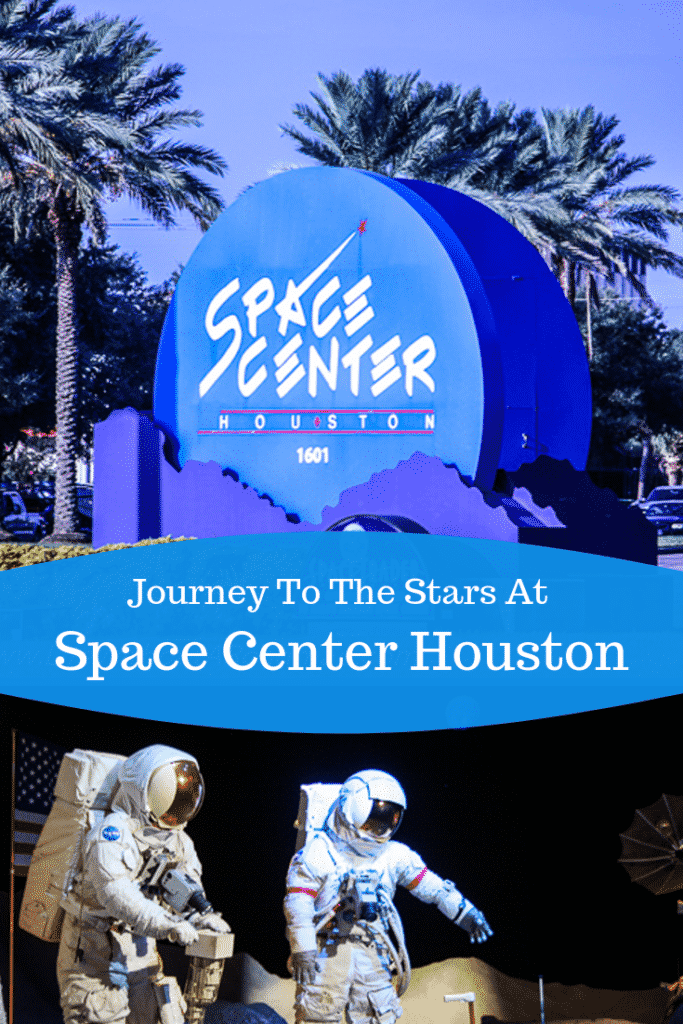 Space Center Houston is located about 30 minutes south of Houston on NASA 1.  They are open Monday – Friday 10a-5p and Saturday/Sunday 10-6p but it is worth noting the hours are subject to change in the event of unforeseen events or circumstances so check their website before you head out.

The prices for admission which include all the exhibits and tram tours:

They also have a membership option which, if you plan to visit several times a year, is your best option.  It not only includes your entrance to the Center but also some other amazing perks like free admission every month, free parking, priority boarding for the tram tours, and more.

Whether you’re a local or planning on visiting the Houston area, a trip to Space Center Houston is a must!  You don’t have to be a “space nerd” to enjoy it, you just have to have curiosity, imagination, and a desire to reach for the stars no matter what age you are!

Get the latest delivered straight to your inbox

We are so excited to have you as part of our travel family!